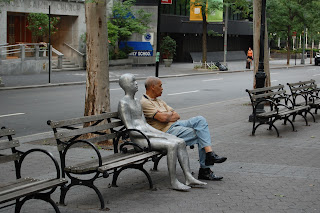 The impact of women on Art in New York City is undeniable. Institutions such as the Whitney Museum, founded by Gertrude Vanderbilt Whitney, and MOMA founded by Abby Rockefeller, are two such examples. I found, however, that the female influence is even more profound, as many of the countless sculptures found in New York, were done by women. This became our focus for a couple of day trips we took to the Big Apple.

We discovered that the best time to visit NYC was early on Sunday morning. The traffic is light and you can park almost anywhere. Beginning “uptown” we found a piece by the aforementioned Gertrude Vanderbilt Whitney. Although known for her wealth, Gertrude not only a major force in Modern Art in America, she also paved the way for a new style of sculpture. Not just honoring the generals of war, she chose to represent the soldiers in a softer light. The Inwood War Memorial was done in 1921 and located in Washington Heights at
Broadway and St. Nicholas Avenue, between 167th and 168th Streets. 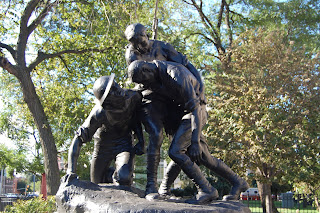 Continuing down Broadway to 155th Street, we find the Hispanic Society of America Museum. Founded in 1904 by railroad heir Archer Milton Huntington, the centerpiece of the terrace is a large equestrian statue of El Cid Campeador done by his wife Anna Vaughn Hyatt Huntington in 1927. Due to construction and the early hour, we were able to only get a glimpse of the statue.  So here is another photo: 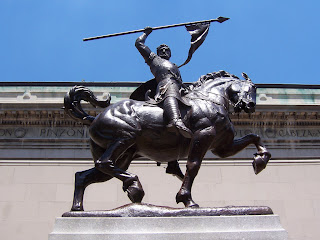 A few years earlier Ms Huntington went to Paris and became enamored with the stories of Joan of Arc and displayed a full-sized plaster cast of Joan at the Paris Salon. In 1915 the bronze was installed on Riverside Drive at 93rd Street. Copies of this piece are in Paris, San Francisco, and Gloucester, MA. 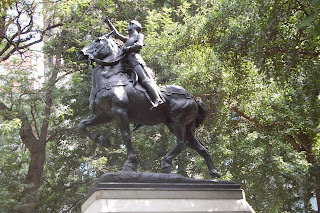 Further down Riverside Drive, at 72nd Street, we found a statue of Eleanor Roosevelt done by Penelope Jencks in 1996. 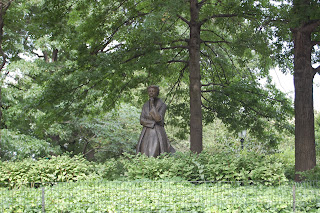 Over on 8th Ave at 122nd Street is a marvelous statue of Harriet Tubman created by Alison Saar in 2008. She depicted the historic abolitionist “not as the conductor of the Underground Railroad, but as the train itself, and unstoppable locomotive with the roots of slavery pulled up in her wake.” 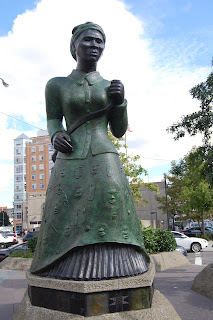 Another key figure in the liberation of African Americans, Frederick Douglass, was immortalized by Gabriel Koren just outside the northwest corner of Central Park in 2010. 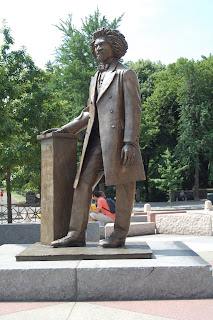 Central Park is a trove of sculptures by women artists. Beginning at the Central Park Conservatory Garden near 5th Avenue and 106th Street, is Bessie Potter Vonnoh’s Pan with nymph and birdbath she called Garden Figure Fountain in 1928. 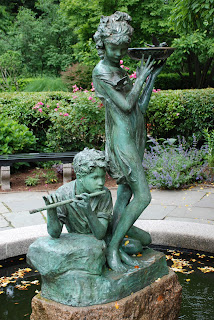 Just west, on the shores of The Lake of Central Park, is the massive Angel of the Waters, also called Bethesda Fountain. This is the only statue commissioned by the Park and was created by Emma Stebbins in 1868. She was the first woman to receive a public commission for a major work in New York City. 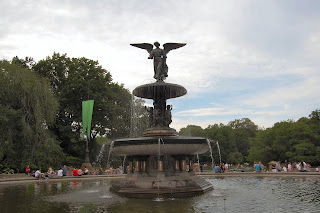 At the southern end of Central Park we found another equestrian statue by Anna Huntington of Jose Marti. Begun in 1950, when she was over eighty years old, it was not unveiled until 1965 due to political ramifications of honoring a Cuban nationalist. 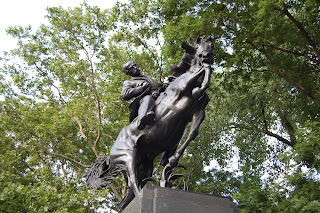 Nearby is a statue of Simon Bolivar done by Sally James Farnham in 1921. 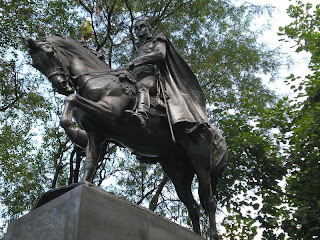 There was also a piece by Eva Rothschild called Empire which was installed in the Park near for several months in 2011. 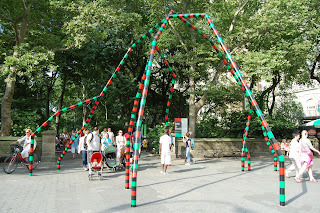 Over on Lexington Avenue neat 78th Street is the All Souls Unitarian Church. In the sanctuary there is a memorial of Theodore Williams sculpted by Evelyn Longman Batchelder. 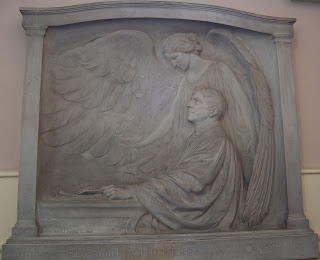 While this, like the John Kennedy Memorial in the United Charities Building, and the plaque of Henry Corbin on Governors Island, are not what you call monumental works, Batchelder’s most famous work is no longer in New York. 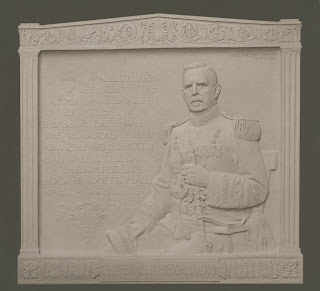 The story begins in 1914 when AT&T announced a national competition for a statue to top it’s new headquarters at 195 Broadway in Manhattan. The final selection was made by AT&T President Theodore N. Vail and Daniel Chester French with the winner being Evelyn Beatrice Longman (this was before she married Batchelder). She wanted her sculpture to be fast like Mercury, but with an air of mystery. Named Genius of Electricity, he is twenty-four feet high, weighs forty tons, and is cast in bronze and covered with 40,000 pieces of gold leaf. One hand holds lightening bolts; the other a coil of wire. He was completed and delivered in 1916 and hoisted to his home 465 feet above street level. Though far from the sight of most, he was soon nicknamed, “Golden Boy.” 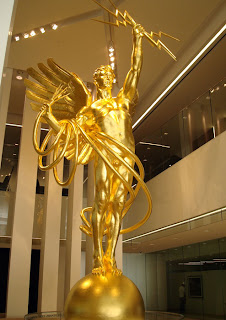 In the 1930s Golden Boy was repositioned as the Spirit of Communication and for the next two decades he appeared on every phone book – always very small, though. AT&T built a new post-Modern headquarters at 550 Madison Avenue in 1984. It was known as the “Chippendale building” for its fancy roofline. Since Golden Boy couldn’t stand on this roof, a seven-story lobby was built specially for him. When he was lowered to street level, his problems (and AT&T’s problems) began.

Golden Boy was massively anatomically correct, it turned out. Concerns arose until Chairman John de Butts made an executive decision. The scaffolding was up around GB for almost a year. When he was unveiled, he was much more modest in his proportions.

Some think that this gelding sealed the fate of AT&T, which lost its monopoly that same year. GB was removed to the new Basking Ridge, New Jersey headquarters in 1992 where he guarded the entrance to executive parking. Following divestiture in 1992, he went to the new headquarters in Bedminster, and reassembled at the edge of a parking lot.

In November 2005, a former subsidiary of AT&T acquired the company and took it’s name and in 2009, moved Golden Boy to the company's new global headquarters in the lobby of the Whitacre Tower, 208 South Akard Street in Dallas, Texas.


Over on the East side, in Dag Hammarskjold Park, along a block of West 47th Street, we found an installation done by Steinunn Thorarisndottir called Borders. I checked and that is a girl's name. This work will remain only until the end of September, 2011. There are twenty-six figures in the project. 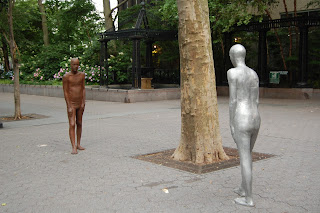 And at the end of the plaza there is another piece done by Ulia and Gustave Kraitz. The Raoul Wallenberg memorial is on a traffic island in front of the U.N. 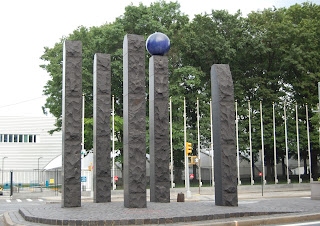 Jumping back to Broadway at 39th Street, there is a bust of former prime minister of Israel Gold Meir, which was sculpted by Beatrice Goldfine in 1984. 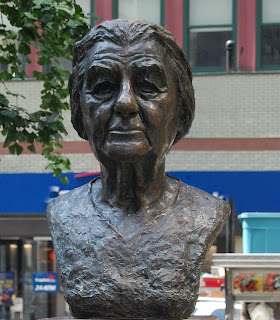 Then heading south and east over to Stuyvesant Square we find a statue of Peter Styvesant by Gertrude Vanderbilt Whitney. I told you she was a busy woman.. The statue was first exhibited at the Netherlands Pavilion in the New York World’s Fair of 1939 before being unveiled at its present location in 1941. 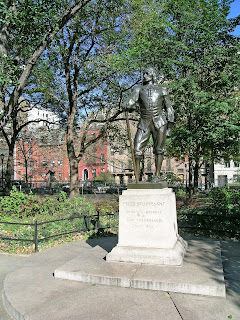 Continuing south to Bowery and Division Street, in the heart of Chinatown, we find a statue of Confusius by Liu Shih, The fifteen-foot statue was erected in 1976. 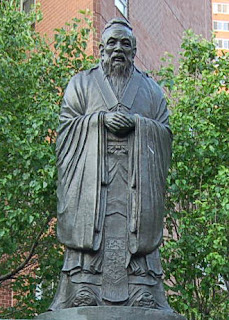 Our last stop in this tour of women sculptors in NYC is Louise Nevelson Plaza, in the Financial District. Bounded by Williams Street, Liberty Street, and Maiden Lane, the plaza was originally dedicated in 1977 and was reconstructed in 2009. It is the first public space in NYC named for an artist and has seven of Nevelson’s steel painted pieces, made from scraps from a foundry in Connecticut.. She called it Shadows and Flags. 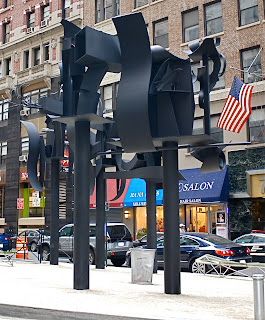 In addition to these artworks, there were additional sculptures by women artist at and near the High Line – a section of the former elevated train line that was renovated to become an elevated urban park. Up to now, it runs above the West side from Gansevoort to 30th Street

We had to opportunity to see sculpture by three women artists: Sarah Sze, Still Life with Landscape (Model for a Habitat): 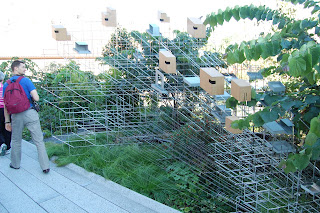 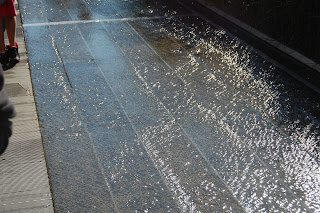 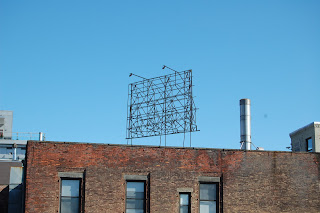 Of course, there is probably more sculpture by women artists in NYC, and we limited our search to just Manhattan.
Posted by Xtreme Art Tourist 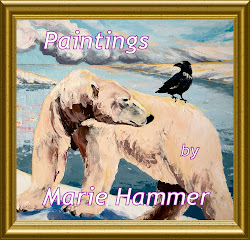 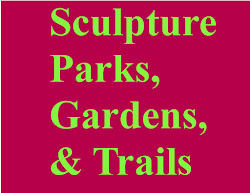 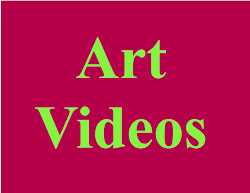